Title III of the Americans with Disabilities Act (ADA)

Get an overview of what ADA compliance means in terms of web accessibility and learn the steps you need to become compliant.
Book a Demo

What is the ADA and how does it relate to websites?

But web accessibility has not always been a new thing under the ADA. State and local government websites have been subject to web accessibility under Title II of the ADA. A compliance toolkit for websites of public entities can be found on the ada.gov website.

Who has to comply with the ADA?

Namely, everyone with a website operating in the US. All websites that fall under the category of ‘Public Accommodation’ a.k.a businesses that are open to the general public will need to comply with Title III of the ADA.

Federal government websites, however, are subject to a different legislation: Section 508 of the Rehabilitation Act 1973

What web accessibility standards does Title III of the ADA use?

While the ADA does not have its own technical standards to define web accessibility compliance, the DOJ has used the global standard, the WCAG 2.0 level AA as reference. The many court cases that arose from lawsuits filed under Title III of the ADA have upheld WCAG 2.0, and subsequently, WCAG 2.1, as their benchmark for compliance standards.

WCAG and the ADA

The WCAG is considered a global standard for website accessibility, whose guidelines are often used as the basis for various international legislations. The WCAG has three levels of compliance, A, AA, and AAA, with A being the easiest level to comply with by addressing basic and urgent functionality issues, and AAA being the most difficult, where a lot of technical fine-tuning is involved. As mentioned above, the DOJ has referenced the WCAG 2.1 AA requirements in lawsuits, but while it is recognized, it is still not yet set as the hard and fast ADA standard. Until the ADA either adopts the WCAG 2.1 or develops its own standards, demand letters, lawsuits, and the DOJ will continue to reference the WCAG 2.1.

How to comply with the ADA

Because WCAG 2.1 is backward compatible, compliance with it also means you are compliant with the older versions. As WCAG level AAA will be close to unattainable, aspiring for Level AA compliance is considered the best option for most businesses and organizations.

The first step to take before anything else is to audit the current accessibility level of your site to see where you stand, From there, you can develop a sustainable strategy for implementing and maintaining web accessibility.

Blog: How to avoid a web accessibility lawsuit

What happens when you fail to comply with Title III of the ADA?

Failure to comply with Title III of the ADA can receive civil penalties of up to $75,000 for the first offense and $150,000 for subsequent violations. Further costs can be incurred from court fees, attorney fees, and the following cost of remediating the website for accessibility.

In 2019, 2,256 lawsuits were filed in federal court by persons with disabilities based on web accessibility barriers. In 2020 however, digital accessibility lawsuits rose to over 3,500 cases! In fact, 2020 saw almost 10 lawsuits filed every business day in the United States. The year also saw web accessibility extending to other digital experiences such as video accessibility, mobile apps, combined website and app, and mobile websites.

Blog: What to do if you receive an ADA demand letter?

To comply with the ADA, there are some basic WCAG principles that you should cover on your website. These principles are known as POUR - Perceivable, Operable, Understandable, and Robust:

Perceivable
Elements that convey information or components of a website’s user interface must be presented in a way that users are able to find, process and understand.

Operable
All functionality and navigation on website should be usable.

Understandable
Information and the operation of the user interface must be clear understandable to users of all abilities.

Robust
The website should be capable of adapting and developing itself to support a variety of current and potentially future user agents, including assistive technologies.

ADA compliance checklist according to the POUR principles:

Extra reading: How to avoid a web accessibility lawsuit

How Monsido can help your website comply with the ADA?

Monsido’s Web Accessibility Module can help you make your website more accessible by auditing your entire site for accessibility against the WCAG 2.1 (and any subsequent updates to the guidelines).

Each audit scans your site for machine-testable issues, provides detailed reports so you can review any errors that may arise, gives you targeted recommendations on how to address these errors based on the guidelines, and shows you your compliance based on WCAG 2.1 levels A, AA, and AAA. You can track and prove your accessibility compliance progress via reports in the History Center. We also offer accessibility training to customers and support, all-inclusive, to ensure that you are well-versed in both automated and manual remediation methods, and are able to efficiently and consistently improve your website’s accessibility.

The information in this article is made available by Monsido ApS and/or its subsidiaries and affiliates and is for informational purposes only so as to provide its customers with a general understanding of current legal developments. It should not be construed as providing specific legal advice, and you acknowledge that no attorney/client relationship exists between you or any third party and Monsido ApS and/or its subsidiaries and affiliates. This article should not be used as a substitute for competent legal advice from a licensed lawyer in your jurisdiction.

Get the datasheet to learn more about the product and how you can benefit from it. 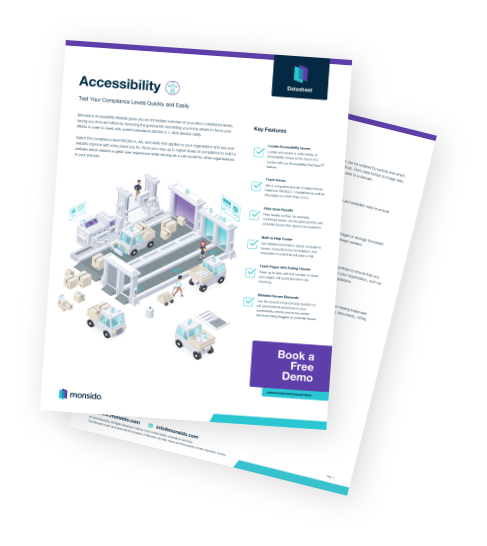 Find out how Monsido’s tools can make your website optimization process efficient and effective.
Book a Demo 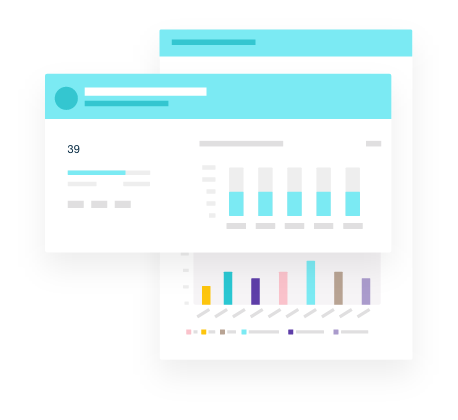 Want to join the Monsido team? We're expanding globally, so check out our available positions.